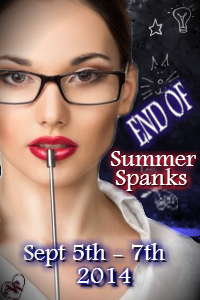 I had so much fun with this blog hop! While reading all the posts did gobble up a chunk of time, I plowed my way through them and loved every single story.

And now it’s time to announce the winner of my post. I used Random.org to make the final decision. I entered all the names and hit the randomize button and…

The winner is Katherine Deane! Congratulations!

Welcome to the End of Summer Spanks Blog Hop! Loads of prizes will be awarded to participants of the blog hop. Click on the image above for a list.

Leave a comment with your email address and I will do a random drawing at the end of the blog hop for a winner of one of my books. Winner can choose from any of my books!

Here’s a short story for your enjoyment:

Minerva was very excited about seeing her piano professor again now that the new semester was starting. He had given her private lessons a few semesters ago and she was sure she was close to getting him to take their relationship to a level beyond that of professor and student. Then it was time for the winter break and much to her dismay Professor Jon Gabriel had gone on sabbatical. Nearly nine months had passed since she’d seen him.

Minnie creamed in her panties every time she thought about him. What a dreamy professor to study classical piano under. He specialized in Lieder music and though it wasn’t what she wanted to focus her music studies on, one look at the fortyish hot professor was enough to change her mind. She soon learned the study of romantic German poems set to music was much more interesting than she had expected.

These mostly nineteenth century poems were typically arranged for a solo singer and piano accompaniment but could be done by a duet, or quartet. After going to a few of Professor Gabriel’s master classes, Minnie became enthralled by the music and even more so by the professor. Six feet tall, dirty blond hair, striking blue eyes, and a commanding presence was more than she could resist.

When she finally coerced him into meeting with her to talk about the possibility of evening instruction, she was excited and oh so hopeful he would catch on to her need for discipline and structure. Disappointment was a hard pill to swallow when it became obvious he was the classic absent-minded professor. It was a constant source of frustration for her when he failed to pick up on any of her hints concerning what she needed.

She purposely made errors just so he would call a halt to her playing and reprimand her. The professor was excellent at lecturing her on her mistakes and how she should correct her bad habits. He spoke with an authoritative voice as a disciplinarian would. It was what had attracted her to him, but he didn’t follow through with anything more than a lengthy lecture on avoiding bad habits and forming new good habits.

Just before winter the break, Minnie had made a bold move after his last assessment of her musical talents. “I’m so sorry, Professor. Perhaps we should devise a system of reward and punishment as an incentive for improvement.”

He had given her a blank look before replying, “You simply need to focus and pay more attention. And practice, practice, and practice more.”

Unknown to Minnie, her final appointment with the professor before the winter break was to be conducted by his assistant. When she entered the practice room, a skinny, geeky girl was waiting for her.

“Professor Gabriel has left on his sabbatical so I’ll be taking over for today.”

“Sabbatical?” Minnie had nearly stuttered. Sabbaticals lasted months, when would she see him again?

“Yes, he won’t be back until the fall semester. Shall we get to work?”

Minnie couldn’t do it. Instead, she excused herself by saying, “Actually, I just stopped by to apologize and cancel for today. Something’s come up, I’m sorry.”

When it was time to register for fall classes she didn’t sign up for one of his classes, opting instead for personal evening instruction. Minnie had a plan.

She dressed carefully for this appointment wearing a white blouse with a black skirt that fell just a few inches above her knees. Under the skirt she wore sheer thigh-high black stockings and a pair of black, lacy bikini panties that left her the better part of her ass cheeks exposed should the professor have the opportunity to peek under her skirt. A black bra under the low cut white blouse was sure to draw his eye to her ample cleavage.

The professor greeted her when she arrived, “Hello, Minerva. I’m glad to see your interest in Lieder is ongoing.”

“Thank you, sir. How was your sabbatical?”

“Very good, thanks for asking. Shall we get started?” He couldn’t help but notice the black shadow of her bra through the white blouse. She carried a long, thin leather case of the kind that might hold a bow for a violin or cello.

She set her things down on the narrow table near the piano, opened her portfolio and withdrew a piece of music she had never played before. She was sure to make mistakes and he would start lecturing her almost immediately. A quick glance at his always neat desk ensured it was ready for her plan.

Minnie began playing, purposely getting the timing off and hitting several wrong keys. Professor Gabriel wasted no time in berating her.

“For heaven’s sake! Haven’t you practiced at all since last we met? Start at the beginning again.”

“Stop! Stop immediately,” he ordered. “This is a waste of my time, Minerva. Either you’ve spent the entire summer without touching a piano, or your talents are even less than I had originally estimated. I suggest we end this now. You may contact me when you’re better prepared.”

“I’m so sorry, sir. Please don’t send me away.” She jumped up from the piano bench and went to the long leather case. Unzipping it, she removed not a bow, but a thin cane. Turning around to face him, she held it out.

“Please, sir. I know what I need. Discipline. I do best when I’m properly disciplined for my shortcomings. If you would just apply this with a strong, firm hand, I know I’ll do better.”

Professor Gabriel took a step back, shaking his head. “This is unacceptable, Minerva. I can’t strike a student with that thing.”

“But sir, technically I’m not your student as I haven’t registered for any of your classes. This is just private instruction and has nothing to do with the college. Please, it would help me so much.” A small tear spilled from her eye.

He ran his hand through his hair, wondering how to respond to this. He should refuse, of course. He should go open the door and ask her to leave. But his cock had awakened at her suggestion that he cane her. The tops of her creamy breasts were straining to be released from the confines of her black bra. What sort of woman wears a black bra under a white blouse?

Seeing his hesitation, Minnie thrust the cane into his hand and stepped to his desk. She bent over it, flipped her skirt above her waist, and then stretched her arms out in front of her to grab the sides of the desk. She felt the cool air on her nearly naked bottom and prayed he would not send her away.

“Please, sir. I promise it will help.” She moved her legs a little further apart and rose up higher on her toes. Her ass was in a perfect position to receive a caning and Professor Gabriel thought he saw a damp spot on her crotch. It was difficult to tell with black panties.

Without any further thought to the matter, he said, “Very well.”

Stepping beside her, he swished the cane several times in the air to get the feel of it. Then he raised the cane and in a short, quick stroke brought it down on her ass. It barely left a mark and her panties interrupted the faint red line that did appear. Unsatisfied with the result, he boldly slipped his fingers beneath the waistline and yanked them down to her knees.

Minnie gasped as the rest of her ass was exposed and inwardly smiled as she settled down for a good caning. She hoped the following strokes would be of more substance than the first one had been.

Tapping the insides of her thighs, the professor said, “Spread your legs further apart.”

“Yes, sir,” she answered and complied. Just to be safe, to be sure she was going to get what she’d been longing for, she added, “If you could strike a bit harder, sir, I believe it will have a greater impact on me.” She giggled a bit at the pun, but he didn’t seem to catch it.

Professor Gabriel felt one should always strive to do their best, no matter what they were attempting to do. Again he swished the cane in the air a few times. Then he tapped it on her ass as if lining up his target.

Minnie felt the cane lift from her bottom, and then heard the beautiful hiss as it swooshed through the air before a red hot bolt of lightening landed across her ass. She screamed and just as he was about to apologize for such a hard strike, she whispered, “Yes!”

Confident now that he’d gotten it right, he tapped her bottom again just below the bright red stripe that had bloomed on her ass. Raising the cane high once more, he brought it down again with equal force and was pleased at the perfect aim just below the last one. She screamed again, but this time he didn’t even pause before he tapped to get his aim, and brought down a third strike.

Even though it was technically the fourth one, he decided to discount the first since it had been inferior. She cried out again and then moaned with what he could only call satisfaction. He brought the cane down three more times in quick succession. Each strike was followed by a scream, then a delicious moan, and then a raising of her beautifully striped bottom for the next one.

On the final blow, she did not raise her ass as if asking for another and he stopped. His trousers were drawn tightly across his bulging cock. With her legs spread, he could clearly see her pussy and how wet it was. It was obvious she was aroused too.

“Minerva, you’re…um, are you all right?”

“I’m fine, sir. Very fine. Thank you. But it seems I need one more thing, if you would oblige me, sir.”

“Certainly, what is it you would have me do?”

He stripped off his clothes in record time and did just that.

Be sure to leave a comment so you you can be included in the drawing and don’t forget to visit the other blogs on this hop.