Here’s another snippet from my book Spank Her Now 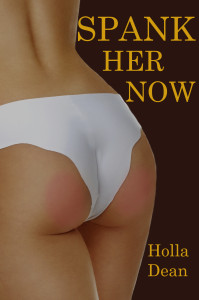 I’ll give you a rundown on the scene first:

Stephen and Eve have just had a bit of an argument over the provocative emails he’s been getting. Eve (who is actually the one sending the emails) pretends to be sick of the entire subject and tells him to send a reply asking to be removed from the email list and then forget about it. She hangs up on him and he tries to call her back several times but she isn’t picking up her phone.

Excerpt:  Her phone rang, she saw it was Stephen. Eve decided not to answer it. Let him get mad.

Stephen called Eve a few more times, but she wouldn’t pick up. He figured she was good and pissed now. Maybe he’d just give her that spanking when he got home tonight.

Eve was at her computer sending another email to Stephen. The title was, “WILL SHE GET SPANKED TONIGHT?” The message area was blank.

Stephen heard the email ding and looked to see what it was. When he read the title he opened the email, saw the message area was blank, and hit the reply button. He left the title the same and in the message area he wrote, “Please take me off your email list. Yes, she will get spanked tonight.”

He hesitated for a brief moment and then hit the send button. Stephen took a deep breath, satisfied with his decision. He wasn’t sure how he was going to do this; he’d never struck a woman in his life. But Eve definitely needed a sound spanking and he decided he would be the one to administer it.

Eve received the reply and thought, Oh no! What have I done? But even as she thought it, her legs squeezed together in anticipation. Did he really mean it? Was he really going to spank her tonight? How would he do it? Would he strip her naked first? Would he leave her panties on or spank her bare bottom?

Stephen spent the rest of his day thinking similar thoughts. How would he approach her to spank her? Should he announce that he would be giving her a spanking? Or should he just get her naked and then take her over his knee? Should he leave her panties on? No, this would be a bare-assed spanking. One of the emails suggested spanking her until her ass was cherry red. That wouldn’t happen if her ass was covered. Oh god, could he really do this? But even as he wondered, he felt his cock twitch with anticipation.

Blurb:   Stephen and Eve have been married for fifteen years. Their marriage has become boring, their sex life is boring. Eve wants to spice things up and begins sending Stephen anonymous emails with titles like, ‘Does Your Wife Need a Spanking?’ But Stephen doesn’t open them because he’s concerned about getting a computer virus. The emails keep coming and finally Stephen decides to open one. Eve gets much more than she ever bargained for when Stephen decides Eve’s attitude needs adjusting and he takes her over his knee for a long, hard spanking.

Available on Amazon,  Barnes and Noble