My A to Z challenge is complete! There were a few days I almost gave up thinking I just didn’t have the time. But here we are at the final letter – Z. And what better than Zinnia Loraine, heroine in Thianna D’s book, His Damsel in Distress? It was the first book in the third season of the Corbin’s Bend series. I loved the character and her interactions with Corbin Nelson. If you haven’t read it yet, I highly recommend it!

Blurb: You’ve known the name Corbin’s Bend for awhile – now meet the man it was named after.
Corbin Nelson had stayed in New York with his non-spanko wife when all of his friends built and moved to Colorado. With his reason for staying in the city gone, and his trust ripped to shreds, he moved to Corbin’s Bend to make a new start. His one rule: he would never give his heart away again. It only took a couple weeks for him to question that tenet when he rescued the same damsel in distress twice.
Zinnia Loraine bought into Corbin’s Bend to hide: from the paparazzi, a scandal, and most of all from a deranged fan. She thought she could hide in her home and stay safe and secure. When her car broke down and she was rescued by Corbin, all thoughts of hiding fled as she was instantly attracted to the tall, middle-aged man. That he was an alpha male who spanked and loved curvy women just made it even better.
Unable to keep their hands off one another after their first date, they both were in this for fun… until her stalker found her and they both realized how much they cared for one another. With his damsel in distress once again, this time Corbin had to call on others to help him. Would he and Zinnia get their happily ever after? Or would his rescuing days be through? If the stalker had his way, their happiness was about to end. 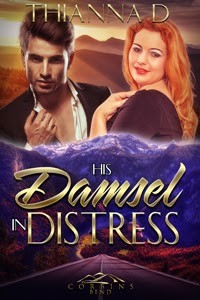 “Does that mean I get to spank you at the end of the night, because you know I have been very remiss on that count up until now?”

Looking at him, she nodded. “Oh, I think so. If I don’t feel your hand across my ass tonight, this just might not work.”

With a nod of his head, he walked toward the door. His hand slamming down hard across her ass as he walked by made her squeal as heat lit up over her right butt cheek. Grinning at her over his shoulder, he said. “Well, we can’t have that now, can we? Are you ready?”