I have one rule. Just one little rule. And it drives me up the wall because I think it’s ridiculous. The rule is NO SWIMMING WHEN I’M HOME ALONE.

DH worries I might get a cramp and drown. Well, I get leg cramps all the time and I haven’t drowned yet. I’ve tried explaining the pool is a lap pool. It’s 40 feet long, but only 6 feet wide. At its deepest point the pool is a mere 6 feet deep. If I had a severe cramp I could easily get to the edge with two or three strokes. If I started to sink I could kick off the bottom and boost myself to the edge. Besides, he can’t swim. He never goes in the pool. Just how does he think he’s going to save me?

His other big worry about swimming alone is I might slip and fall, cracking my skull open on the edge as I exit the pool. There I would be, bleeding on the pool steps, dying all alone. What does he think would be different (other than the me being alone) if he’s here? Should I fall in such a way, my skull would already be cracked open even if he were here. By the time the paramedics came, I’d probably be dead anyway. I mean, come on, how many people survive their skull cracking open? 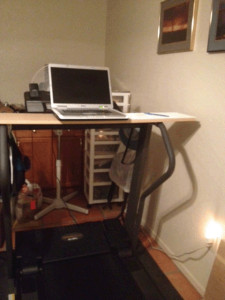 So in the winter when it’s too cold to swim, and when DH is not home during the summer swim season, I write while exercising on my treadmill desk. Yes, that’s it in the photo above. It works great and lets me multi-task. I can burn some fat off my butt while getting a couple of thousand words written. The fact that I can write while exercising is the only thing I like about the treadmill. I much prefer doing 66 laps – half a mile in my pool – even though I can’t write at the same time.

In fact, I’m huffing and puffing away as I write this post. I have an hour and a half to go so next I’ll pull up my latest work in progress and work on that.