A to Z Spanking Challenge

Only four more days of this blog challenge! I’ve been scrounging in my backlist coming up with excerpts to fill many of the letters in alphabet. Today’s letter is W and wouldn’t you know I have book title that starts with W. Withdrawing Consent. I hope you enjoy the excerpt!

Blurb: Christine and Alex Morgan are a young couple in their late twenties. Both are busy professionals and Christine has several outside interests. Her book club has chosen a new title called “Save Your Marriage the Old Fashioned Way.” Christine thinks it’s nothing but a way to take women back to the Stone Age, but she reads it for the book club and discovers the old fashioned way to save your marriage is by utilizing something called Domestic Discipline. Alex finds the book interesting and when the members of Christine’s book club next meet, they all decide to try this plan in their own relationships for a thirty day trial. Things go awry when Alex and Christine put this dynamic to work in their marriage and the question now is; can they get back on track and have a happy relationship? 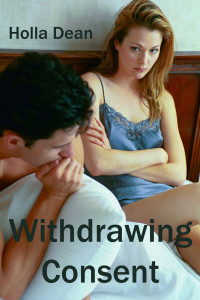 “I’m withdrawing consent,” Christine announced as she sat down at the table across from Alex.
“What? You can’t do that!” Alex blustered in his Head of Household voice that he had refined over the past eighteen months. “I won’t allow it!”
Christine looked down at the food on her plate that she didn’t want to eat and wondered if she’d be in trouble after she told him he didn’t have a say about this. Would he think it was disrespectful for her to remind him that she had the right to withdraw consent? Would he accuse her of being bratty? Of not following his leadership? Would he jump up, escort her to the bedroom, and deliver the usual punishment for those infractions?
She was afraid to look at him because she knew he would see the challenge in her eyes. She didn’t know any other way to avoid him seeing that challenge other than by not looking at him. Her dark blonde hair hid most of her face as it swung forward when her head was lowered. She was within the bounds they had discussed eighteen months ago when they first embarked on this new dynamic for their marriage.
“Christine, what are you talking about?” Alex demanded. “What has upset you now?”
She took a bite of food and slowly chewed it, then swallowed it. There was every chance she’d be punished for not eating if she didn’t eat at least half of what was on her plate.
“I’m waiting, Christine. Are you going to answer me? Or are you purposely trying to provoke me?”
“I’m sorry, Alex.” She spoke without looking at him. “I cannot continue this way any longer and I am withdrawing consent.”
“What the hell are you talking about?” He was almost shouting now as he repeated himself and she knew if she spoke to him in that tone with her voice raised, she would be given a spanking. In fact, the spanking would most likely not be the total of her punishment. There’d probably be something more such as writing pages of lines saying something like ‘I will not disrespect my husband’ or even some corner time.

Check out the rest of the great blog posts in this challenge!